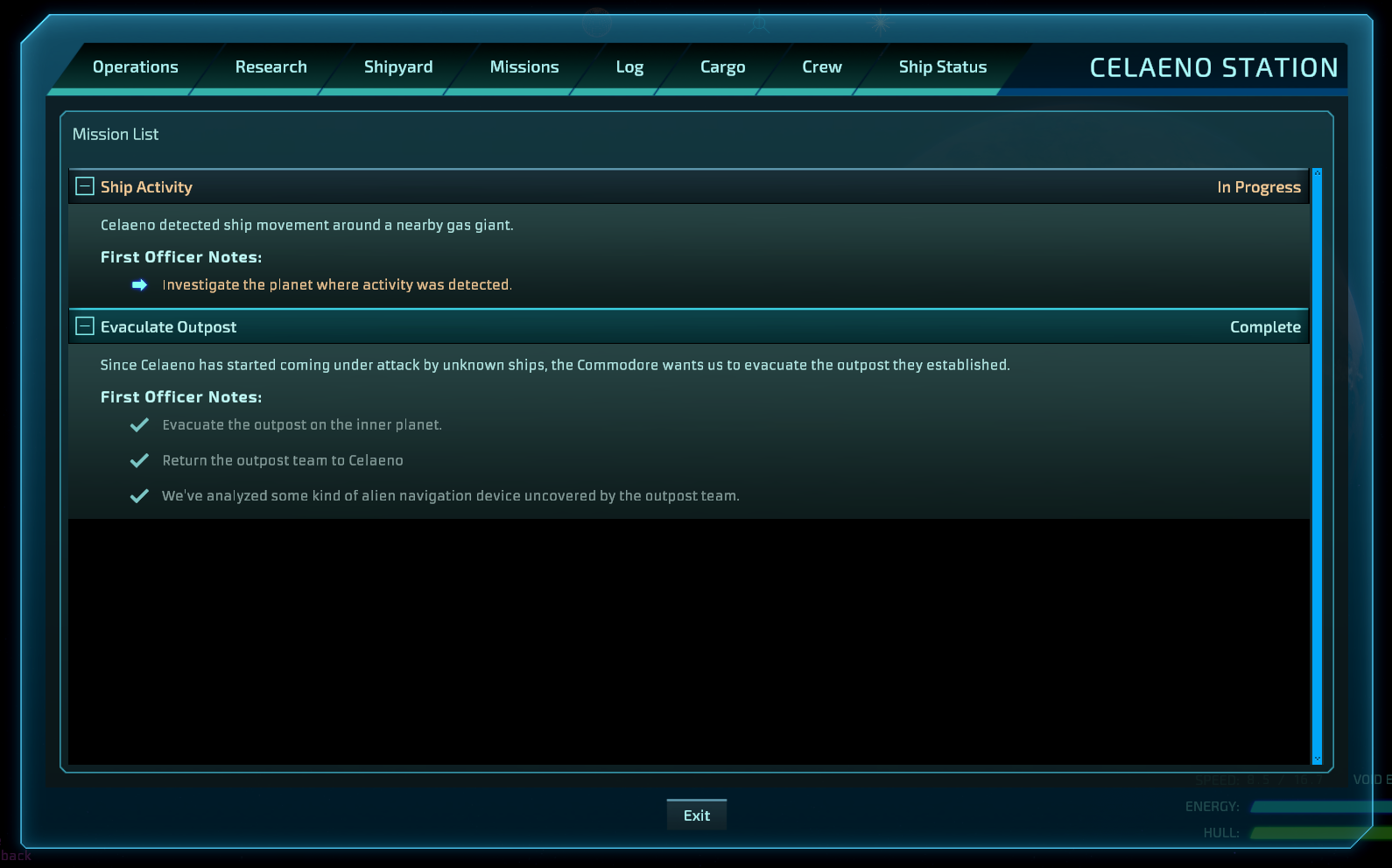 One of the things I discovered in the development of the original Starcom: Nexus is how difficult it is to create a good mission system.

A mission system needs to be flexible enough to create a wide variety of interesting stories, but with enough reusable structure so that not every mission ends up as 100% bespoke C# code separated by yield statements. It needs to be able to interact with almost every system in the game, but also with enough separation that modifying a system has a low probability of breaking missions. It also needs to be able to save its state so that it can progress properly if the player saves and reloads the game at almost any point.

I initially conceived of missions as concrete implementations of an abstract base Mission class. The base class could handle “common” mission activities like detecting when a player was near an enemy or showing a crew notification, and concrete sub-classes would handle different types of missions, like fetch-quests or kill X enemies.

This idea didn’t work very well at all.

After implementing a few missions I realized that none were just the same class with different data. Even very similar missions wanted slightly different logic here and there, like when the First Officer would pop-in with a suggestion or a delay should be added. They also didn’t handle “out-of-flow” logic gracefully, where the player could execute some steps in any order.

Consider a real example, the very first mission in the game:

That’s pretty simple: a conversation starts the mission, then a one-off prefab effect gets spawned when the player comes within a certain distance of an objective.

But in actual implementation I discovered there were lots of little tweaks that made this mission unique. The conversation doesn’t start the instant the game begins, the first officer needed to make some observations to the player, etc.

The “wait/do” logic was simple enough to be re-usable, but could be combined with infinite variation to handle most stories.

So I built a node-based system using Unity’s graph editor and the XNode package:

Each node in the graph is a specific MissionNode class that detects some game state then does something, then the mission advances to the next node and repeats. The state of the mission can be saved simply by noting the indices of current nodes.

I say “indices” not “index” because if you look closely, there are actually two independent sequences in the mission. There’s the normal, expected path and a secondary path below that supplies some gentle nudging to the player if they aren’t heading toward their objective.

The MissionNode inherits from XNode’s Node class, which is a scriptable object, so exposed properties are editable at design time in Unity.

Overall, this system worked really well. There were a number of unexpected benefits that I didn’t anticipate. For example a lot of text snippets became organized in a consistent way that made localization easier.

Now I’m working on a sequel and I’m building on what I learned during development of Starcom: Nexus to create a custom mission editor.

Why not use the same system? A few reasons:

So I built a custom editor tool for different types of content, including missions.

Here’s a GIF of the new mission authoring tool in action:

The overall UI of the editor is a custom Unity UI “table” object that arranges contents into a flexible grid of rows and columns that adjust to the size of their content. Right-clicking on an element brings up a context-menu which is really just a collection of vertical layout groups. The edit dialogue is a form-like object with a collection of input prototypes that are instantiated based on the object being edited using reflection. Annotations on the object fields tell the form what UI element to use. Creating this editor was a great deal of work, but these features are used in all the other areas of content creation for the game such as dialogues, tech tree, discoveries, etc.

A mission is a collection of one or more “lanes,” each of which consists of one or more nodes. In the above image a lane is a horizontal row of nodes. Every mission update (which happens several times a second, not every frame), the MissionManager checks the active node for each lane and sees if all of its conditions (green blocks) are satisfied. If so, it executes all the actions (pink blocks) and then advances the active node for that lane.

Saving a mission’s state simply notes the active node index for each lane. If a node needs to store additional variables (e.g., for use in a dialogue tree, or another lane), it can use the GameVars object that acts as a persistent KeyValue store for named persistent booleans and numerics.

I’ve already created several dozen missions for the current build of Starcom: Unknown Space that have been tested in the first few small rounds of closed betas. A larger round is starting shortly which will put some new, more complex missions (from a design standpoint) to the test.